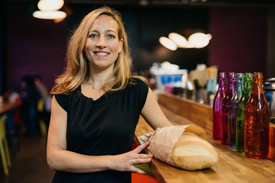 Saasha is the daughter of Iowa hippy entrepreneurs who was raised with a deep appreciation for the planet and its scarce resources. She rebelled by moving to New York City and joining Morgan Stanley after graduating from the University of Chicago. After completing her MBA at Stanford Graduate School of Business, where she met her OLIO co-founder Tessa, Saasha spent 9 years in various strategy and businesses development roles - first at McKinsey and most recently as Vice President of International Partnerships, American Express.

She could only rebel for so long, however, and when on maternity leave in 2012 opened her first business in London, which she outfitted entirely from FreeCycle. It was a short skip and a hop to founding OLIO, a sharing app connecting neighbours to stop good food from going to waste, with Tessa in 2015.

If you want to hear more from Saasha Celestial-One, then tune into our Twitter interview on Wednesday 7th June at 4pm, following the hashtag #MIVReveals.